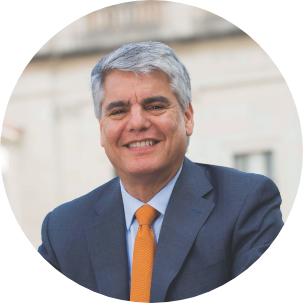 Gregory L. Fenves is the president of The University of Texas at Austin. Before becoming president in 2015, he served the university as executive vice president and provost and as dean of the Cockrell School of Engineering.

President Fenves’ Family
Greg is married to Carmel Martinez Fenves, a textile artist who participates in UT’s programs for first-generation college students. They have two adult daughters, a son-in-law and a granddaughter — all of whom live in Austin. The Fenves family often spends time together at Texas Athletics events and at UT gatherings across the state and around the world. In his free time, Greg enjoys reading — especially Haruki Murakami novels — and traveling with his family. Art museums are always at the top of Greg and Carmel’s destination list.

During his presidency, Greg Fenves has prioritized student success and experiential learning, invested substantially in faculty members and their research and strengthened interdisciplinary collaboration across departments. By introducing scholarship programs and bolstering student resources and support, UT has increased four-year graduation rates to the highest levels in the university’s history.

In 2018, President Fenves introduced the Texas Advance Commitment to increase affordability with assured financial aid for low- and middle-income UT students. In 2019, the UT System Board of Regents approved funding to expand the commitment, which now ensures full tuition coverage at The University of Texas at Austin for in-state students with need from families earning up to $65,000 per year. To further improve access and affordability, President Fenves has announced plans to increase university housing, with the eventual goal of being able to offer housing to all first-year students.

Diversity and inclusion are cornerstones of President Fenves’ vision for the university. In 2015, his administration successfully defended UT’s admissions practices before the United States Supreme Court. The landmark ruling in the Fisher v. University of Texas at Austin case enabled UT to continue recruiting a diverse student body, reflective of a wide range of backgrounds and experiences.

President Fenves was instrumental in the founding of UT’s Dell Medical School — the first medical school in nearly 50 years to be built from the ground up at a top-tier public research university. Today, Dell Med and the clinical practice UT Health Austin are furthering the university’s health and health care mission by collaborating with colleges and departments across campus and partnering with organizations and communities throughout Austin.

President Fenves has expanded international engagement at UT — establishing the International Board of Advisors and the President’s Award for Global Learning among other globally focused initiatives. He hosts monthly lunches with students and meets regularly with student leaders to discuss campus issues and develop policies to improve student life. President Fenves works with the UT Staff Council to provide support for the university’s 20,000 staff members. He has also led unique public-private partnerships to address the growing space needs at UT, including the construction of the first building in Austin’s emerging Innovation District and a new multipurpose athletics and events arena.

Academic Career
President Fenves earned a bachelor’s degree from Cornell University and a master’s degree and Ph.D. from the University of California, Berkeley, all in civil engineering. He began his career in 1984 as an assistant professor in UT’s Department of Civil Engineering. He then served more than 20 years on the faculty of the University of California, Berkeley, where he became an internationally renowned expert on structural engineering for earthquakes and chair of its top-ranked department of civil and environmental engineering.

For his research in earthquake engineering and academic leadership, President Fenves was elected in 2014 to the National Academy of Engineering, the highest recognition for an engineer in the United States. He has received numerous national awards, including the Presidential Young Investigator Award from the National Science Foundation; and the Walter L. Huber Research Prize, the Moisseiff Award and the J. James R. Croes Medal from the American Society of Civil Engineers. 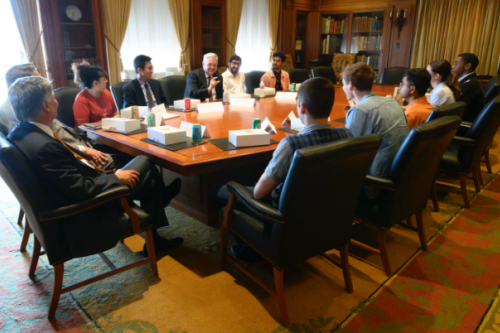 Registration is open for the Spring 2020 student lunch.

An opportunity for students to have lunch with President Fenves, enjoy a spirited conversation and discuss significant issues at UT.

Past Student Topics and FAQs 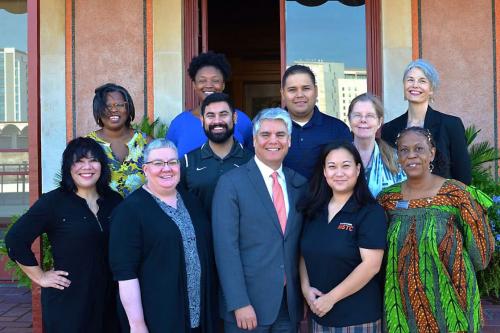 An opportunity for staff to have lunch with President Fenves, enjoy a spirited conversation and discuss significant issues at UT.

Registration for the Spring 2020 staff lunch is closed.

Past Staff Topics and FAQs