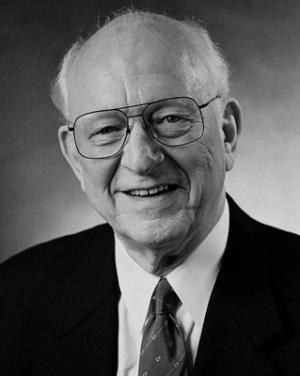 William Livingston was a force and fixture at The University of Texas for 58 years. He began as a young government professor, served as chair of the Department of Government, and was vice president and dean of Graduate Studies at the time he was tapped to lead UT during the search for the successor to William Cunningham. After his service as interim president, he became a senior vice president and beloved campus figure.

Born in 1920 in Ohio, he earned the Bronze Star and Purple Heart as a field artillery officer in Europe during World War II. He earned his bachelor’s and master’s degrees from the Ohio State University and his doctorate from Yale University. In the late 1960s, he chaired the committee that formed the LBJ School of Public Affairs. He served as vice chancellor of academic programs at the UT System and returned to the Austin campus as vice president and dean of Graduate Studies from 1979-1995.

Students of the 1990s remember a lovable vice president whose sonorous baritone became the voice of TEX, the telephone registration system, and whose sign-off “Goodbye … and good luck” became his famous trademark around campus — even if the Edward R. Murrow reference was lost on the young registrants. In his final act before retirement, Livingston donated the more than 1,000 books that lined his office walls to the university. Livingston died in 2013 at 93.