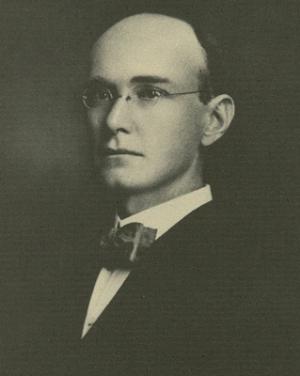 Born in Raleigh, North Carolina, in 1870, William Battle received degrees from the University of North Carolina and Harvard University. He joined UT Austin in 1893 as an associate professor of Greek and would eventually become dean of the College of Arts in 1908 and then of the faculty three years later.

Much of his two years of president was spent fighting with Gov. James E. Ferguson, who accused Battle of using state money for purposes other than what was stated in the university appropriation bill. Gov. Ferguson wanted Battle removed from the faculty, but the Board of Regents did not allow it.

Battle left the university to teach at the University of Cincinnati but returned in 1920 to become a professor of classical languages and chairman of the faculty building committee. Besides teaching, he designed the UT seal in 1901, edited the first student directory in 1900, and founded the first ex-students' magazine. He furnished the money in 1898 to establish the University Co-Op and served as its first manager.

When he died in 1955, he left the university his Austin property and his 14,000-volume library.

© The University of Texas at Austin 2023