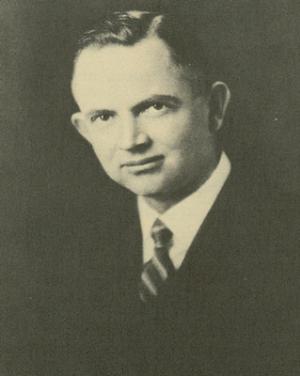 Born in Arlington, Texas, the year the university was founded, 1883, Walter Marshall William Splawn attended Baylor University, Yale University and the University of Chicago. He practiced law in Fort Worth before joining UT’s economics faculty in 1919.

When he was named president of the university in 1924, he was the regents’ second choice. However, Splawn also had been appointed Railroad Commissioner by Gov. Pat Morris Neff and had been nominated by the Democratic Party to succeed himself. He chose to be UT’s president, and during his three-year tenure ensured the success of the graduate school by acquiring a legislative appropriation of $50,000 for graduate professorships, which raised the whole standard of salaries at UT. The graduate faculty was completely reorganized.

After leaving the presidency, Splawn served as a referee on the War Claims Commission, as chairman of the Board of Arbitration of Western Railroads and Group of Employees, and settled disputes under the War Claims Act. Splawn was dean of the graduate school at American University from 1929 to 1934.

His work on the communications, railroad and security industries was instrumental to passage of regulatory statutes and the Federal Communications Act of 1934. From 1934 to 1953, Splawn was a member of the Interstate Commerce Commission and served as chairman for a number of years. He died in 1963 at 79.