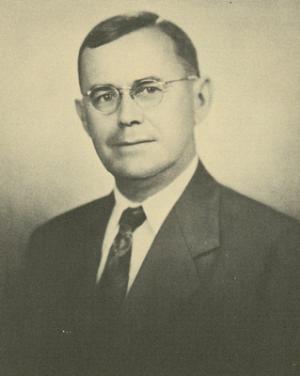 In 1944, when the conflict between the regents and President Homer Price Rainey had reached a boiling point, the UT faculty elected a committee of three professors to attend a regents meeting in Houston to try to mediate a solution. Biology professor Theodophilus S. Painter was among the three. After the meeting, he retired for the night but was awoken, told that President Rainey had been dismissed, and was asked to become acting president. In order to preserve faculty control of the university’s direction, he reluctantly accepted. Two years later, he was appointed president. Painter never wanted the position because he did not want to sacrifice his teaching and research. Twice he tried to resign but was convinced to continue out of loyalty.

Born in 1889 in Virginia, Painter was a sickly child and received his early education at home from tutors. Interested in biology, physics and chemistry, he earned degrees from Roanoke College and Yale University, where he used a microscope for the first time. He changed his major and received his doctorate in zoology. After teaching in Massachusetts and at Yale, he joined UT Austin’s faculty in 1916. His enthusiasm for biology was contagious. He was fond of saying that to become a good cytologist, a student had to be practical enough to repair a Model T Ford with wire and a pair of pliers.

Painter might be best known to history as the named defendant in the Supreme Court case Sweatt v. Painter, which opened all of higher education to ethnic minorities and paved the way for Brown v. The Board of Education. He died in 1969 while returning home from a hunting trip.