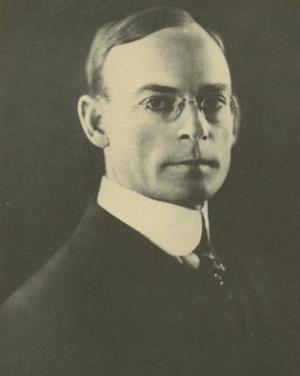 At the time of his selection as president, Robert E. Vinson was president of the Austin Presbyterian Theological Seminary north of the UT campus. At the start of his UT presidency, Gov. Jim Ferguson sought his dismissal and that of six faculty members whom he disliked. The governor also attempted to oust regents who opposed him and vetoed almost all of the university’s appropriation for 1917-1919. With the support of faculty, alumni, students and other citizens, Vinson successfully fought these efforts, and Gov. Ferguson was impeached by the Texas Legislature for these and other actions.

During the early part of his tenure, UT also was subsumed by activity surrounding World War I. Vinson established four Army units at the university: the Students Army Training Corps, the School of Military Aeronautics, the School of Automobile Mechanics and the Radio School. Following the war, Vinson proposed expanding the campus, initially by moving it to the Brackenridge tract on Lake Austin. However, legislative appropriations allowed for the purchase of substantial acreage adjoining the existing campus. More than 1,200 Austin citizens served as cosigners of a bond to protect the state from the cost of buying this land. Vinson then initiated a fundraising campaign to expand the campus on the newly acquired land. Two university landmarks eventually were built as a result of his labors: Memorial Stadium and Gregory Gym.

He resigned to accept the presidency of Case Western Reserve University in Cleveland. He died in 1945 at 68.