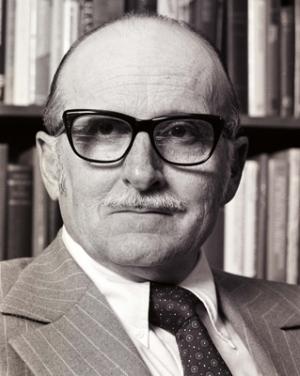 Peter Flawn, a geologist, declared a “War on Mediocrity” during his six years as president.

Born in Miami in 1926, he studied at Oberlin College and earned his doctorate at Yale University. He began his career as a junior geologist in the Mineral Deposits branch of the U.S. Geological Survey in 1948, and he conducted research at the Bureau of Economic Geology from 1949 to 1960.

Flawn was president of UT San Antonio for five years before returning to Austin. Here, his accomplishments included a new core curriculum and higher admission standards; a larger number of National Merit Scholars than any other public university; and a total of 802 endowed faculty positions. He presided over the university’s centennial celebration in 1983. He was named president emeritus by the Board of Regents in 1985.

Flawn returned to the university in 1997 at age 71 to serve as interim president during the search that culminated in the Larry Faulkner presidency. Not content to be a caretaker president, Flawn launched the ambitious $1 billion capital campaign — “We’re Texas” — and, three weeks into the campaign, fired his vice president for development. He also actively dealt with the public controversy in the aftermath of the Hopwood v. Texas decision banning racial consideration in admissions.

In 1985, the building previously known as the Undergraduate Library was renamed the Flawn Academic Center in honor of the retiring president. Flawn passed away in 2017 at age 91.