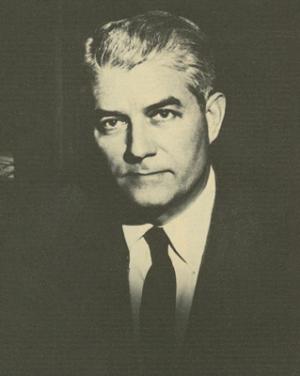 Born in Huntsville, Texas, in 1907, Logan Wilson received a bachelor's degree from Sam Houston State University and a master's degree from UT Austin in 1927. He earned master's and doctoral degrees from Harvard University in the late 1930s.

Early on in his career as a sociologist, he taught at the University of Maryland and Tulane University, where he also served as chairman of sociology and dean of Newcomb College. He went on to serve as vice president and provost of the Consolidated University of North Carolina. In 1953, he was selected president of UT Austin, and in 1960 he was named chancellor of the university.

Two of President Wilson's most significant accomplishments were passage of the state constitutional amendment to expand the Available and Permanent University funds and the creation of a commission to oversee post-secondary education, the Texas Commission on Higher Education. Though it was President Theophilus Shickel Painter who was the named defendant in the Supreme Court case Sweatt v. Painter, the university was integrated in 1956 under President Wilson.

He resigned from the university in 1961 to direct the American Council on Education. As head of ACE, he led efforts to raise degree standards and improve graduate studies facilities in American colleges and universities.