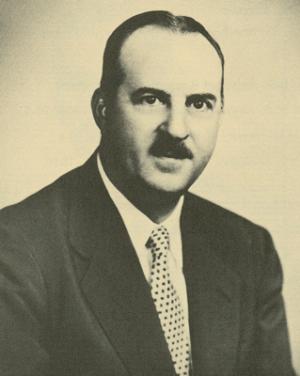 An Illinois native, James Dolley spent 50 years at the university. He was a scholar and teacher in the area of finance and banking. For more than three decades he served as director of Austin National Bank, the area’s largest commercial bank. During the nearly 12 years Dolley served the UT System as chief fiscal officer, the Permanent Fund more than doubled to $479 million. At the same time, the trust and special funds of the system’s endowment resources increased threefold, and the total investment in the UT System’s physical plant rose from slightly more than $100 million to almost $270 million.

Dolley was a lifelong sports fan, participating in basketball, football and javelin-throwing during college after World War I. He even coached high school football. Later, his passion for sports manifested in his service on the Athletic Council. He hired Dana X. Bible as the university’s first head football coach. When Dolley returned to fulltime teaching in 1966, he concentrated on meeting demand for his Investment Analysis course, long one of the most popular courses in the business school’s curriculum. He died in 1977.

© The University of Texas at Austin 2021