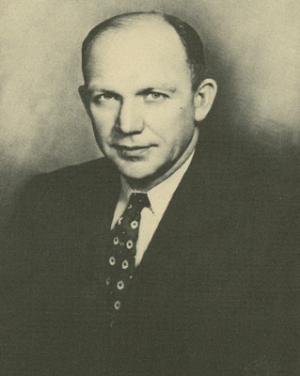 Born in Clarksville, Texas, in 1896, Homer Price Rainey was an ordained a minister by the age of 19. With degrees from Austin College and the University of Chicago, Rainey taught at the University of Oregon before serving as president of Franklin College in Indiana and later, Bucknell University.

In 1939, Rainey became president of UT Austin. He opened the Latin American Institute, strengthened the graduate school, increased the faculty, expanded the building construction program for the College of Fine Arts, organized the management of the Hogg Foundation for Mental Health, and substantially increased library holdings.

In 1941, the Board of Regents began pressing Rainey to fire four full professors of economics who supported New Deal policies. A year later, the board succeeded in ousting four non-tenured faculty members for defending federal labor laws. Rainey angered the regents by seeking to bring the UT Medical Branch at Galveston under the institution's purview and protesting the weakening of tenure and funding for social science research. Matters came to a head Oct. 12, 1944, when Rainey publicly protested the regents' suppression of the teaching of the novel “USA” by John Dos Passos. The regents fired Rainey on Nov. 1, 1944. Some 8,000 students went on strike and marched to the Capitol and Governor's Mansion. Their efforts to reinstate the president failed, but Rainey became a national symbol for academic freedom.

In 1946, he unsuccessfully ran for governor. In 1947, Rainey became president of Stephens College. In the 1950s he became a professor of education at the University of Colorado. Rainey died in 1985 at 89.

© The University of Texas at Austin 2022