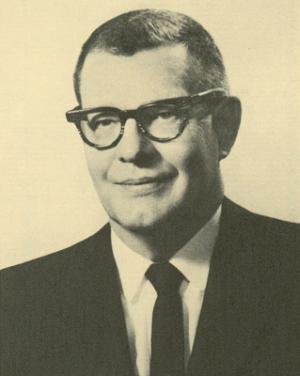 In 1995, a panel of UT historians ranked Harry Ransom as the most influential person in the University of Texas at Austin’s history. Born in Galveston, Texas, in 1908, he earned degrees in English from the University of the South and Yale University. He also studied at Harvard University and the University of London. Joining UT Austin in 1935 as an instructor of English, he advanced through the academic ranks. From 1942 to 1946, he was in the Air Force and advanced to major. In 1951 he was appointed assistant dean of the Graduate School, beginning his march to the top of the administration: associate dean, dean of the College of Arts and Sciences, vice president and provost, president, and finally, chancellor of the University of Texas System.

He was instrumental in a major expansion of library materials throughout the system. His efforts were concentrated on the Austin campus, where in 1957 he proposed a program for expanding the special collections. Many believe Ransom's most lasting contribution to be the Humanities Research Center. The HRC, renamed the Harry Ransom Center in 1974, put UT on the map as a repository of cultural treasures such as the Gutenberg Bible and the world’s first photograph, but more especially artifacts of 20th century humanities. Ransom’s own research interests were in copyright law, bibliography, Texas history, and 18th and 19th century literary history. As president and chancellor (during a period in which the chancellor functioned as UT Austin president), he formed honors programs such as Plan II for the bachelor of arts degree, founded the Chancellor’s Council, and presided over the concept and construction of what is now the Flawn Academic Center, which then featured an innovative open-shelf library and audiovisual facilities. Ransom died in Dripping Springs, Texas, in 1976.