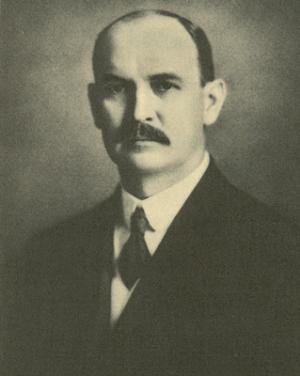 A political scientist, David Houston had been president of Texas A&M for three years before becoming president of the university.

Born in 1866 in North Carolina, he joined the faculty in 1894 as an adjunct professor and became dean of the faculty in 1899. In 1902 he left to be president of Texas Agricultural and Mechanical College (now Texas A&M University) but returned three years later to lead UT Austin. During his three-year administration, the university organized its doctoral program and raised admission standards for freshmen and for law and medical students. A new law school building was also completed. He left UT to become chancellor at Washington University in St. Louis, after which he served as President Woodrow Wilson’s secretary of agriculture and then secretary of the treasury, and then served as chairman of the Federal Reserve Board. After leaving government service, he became president of the Mutual Life Insurance Company of New York and served on numerous boards. He died in 1940 at 74.